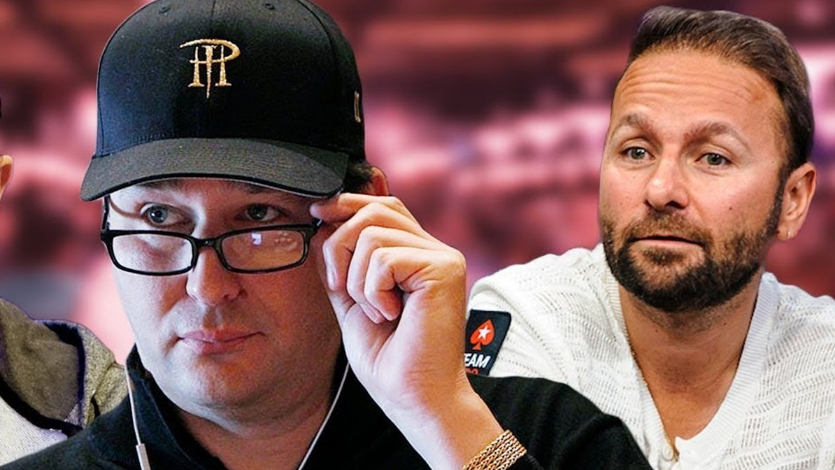 It’s been just a week since Daniel Negreanu’s challenge against Doug Polk ended. Despite the fact that Negreanu lost $ 1.2 million, he is already ready to fight the next opponent. The choice fell on Phil Hellmuth.

Daniel was ready for anything

Even when the challenge is against Daga Polka (Doug Polk) was coming to an end and everyone knew that Daniel Negreanu (Daniel Negreanu) will lose, KidPoker announced – I’m ready for both rematch and a new challenge against almost anyone… Several months of hard work on the game with a team of coaches turned his mind about heads-up and poker in general. Roughly speaking, it turns out that for $ 1.2 million, the Polk made a new out of Negreanu “GTO adept”.

Moreover, Polk himself said that a rematch against the “modern” Negreanu would not be easy, so he tactfully refused. In general, according to WCGRider, Negreanu will now beat anyone in the world who does not specifically specialize in heads-up.

It would seem that all viewers of the challenge agreed that Negreanu improved his skill incredibly in the 25,000 hands that he played at $ 200/400. His strategy and sizing became like a real regular, not like a guy from a poker TV show.

But even here there were “dissenters”. Among them, the loudest was Phil Helmut (Phil Hellmuth), who bet an unknown amount of money to win Negreanu against Polk. According to him, he hoped that Daniel would show his poker talent, and not try to play GTO, as if on a foreign field.

I’m upset with how Daniel played the challenge. He tried to fight “fire against fire”, but it was necessary to fight “Daniel against fire”. By the way, I suggested that Doug play next with me. I’m ready. I won 29 of the last 30 heads-up matches, I won the last heads-up tournament I played. I lost only once – to my “boss” Cary Katz.

As we remember, Doug Polk is going “Go into the sunset” and has no plans to play poker with anyone, at least in the near future. Daniel, on the other hand, was hurt by Helmut’s words, so he tweeted:

Me @phil_hellmuth you said you watched “zero” of the match but seem to have strong opinions on the play.

I’ll play you a heads up match live, online, at any stakes you feel comfortable with for as many hands as you would like.

Transfer: Hey Helmut, you said you didn’t watch my match with Polk, but you seem to allow yourself to draw conclusions about my game.

I am ready to play a match with you offline or online, at any rates that are comfortable for you, any number of hands. What do you say, big guy?

Will Negreanu vs Helmut match?

Is not a fact. So far, Phil has not responded to the challenge of his longtime friend, and there is a huge problem in their potential heads-up – Hellmuth is positioning himself exclusively as an offline player and with a high probability he will offer Negreanu to play in the PokerGO TV studio.

What does this mean? That the format will surely be like a poker show «King of the Hill», where Hellmuth recently won $ 350,000 against Antonio Esfandiari in a three-match streak. Let’s briefly recall the conditions: participants buy-in for $ 50,000, play a match, and the loser has the opportunity to challenge the winner to a re-match with double buy-ins ($ 100,000, then $ 200,000, and so on). Simply put, there is no reason to hope for a full-fledged challenge for 20-30 thousand hands. Most likely, there will be a couple of meetings and disperse.

If, however, Helmut agrees to something more serious, then the overwhelming majority of commentators believe that Negreanu will simply destroy him. “Considering that KidPoker only lost 9bb / 100 over 25k hands to Polk, his winrate will be about 2 times higher against Helmut!”

What are your thoughts on the heads-up of two of the most prominent poker players of the last decade? Will their fight take place and does the poker world really need it?