Knockout series at Pokerdom – schedule, tournaments with the largest guarantees … 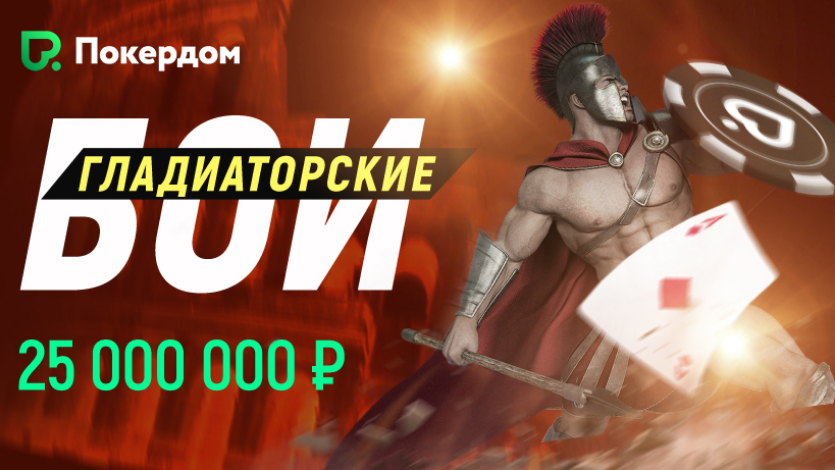 On January 15, Pokerdom announced a new knockout series called “Gladiator Fights” from January 29 to February 21, 2021. We’ve put together some of the biggest events, promotions, and expected rewards for champions for you.

The program includes 128 knockout tournaments with buy-ins from ₽250 to ₽15K and guarantees from ₽25K to ₽3.3M:

Tournaments start every hour from 17:00 to 22:00 Moscow time. At the end of the series, the winners of the leaderboards will receive cups, as well as:

Tournaments with guarantees over ₽250K

The first will be the opening tournament “Colosseum” with a buy-in of ₽2.5K and a guarantee of ₽1M. It starts on January 29 at 18:00 Moscow time, registration is already open.

For fans of each discipline, Pokerdom has prepared events with large guarantees. It will be possible to qualify for them already from January 18th via satellites.

Promotions within the framework of “Gladiator battles”

Pokerdom also gives the players of the new knockout series tournaments the opportunity to receive additional money for active play. For this, two leaderboards will be held during the series. Upon completion of the “Gladiatorial Battles”, additional prizes for each leaderboard will be awarded to TOP-25 players.

Points will be awarded for playing in tournaments in the series. The number of points depends on the occupied place:

The event buy-in affects the multiplier for the points received:

How exactly points will be credited to it is still unknown – Pokerdom has not announced the terms yet. At the time of the article’s release, only information about the awards for the winners is available.

Follow the news on Gladiator Battles in Telegram channels Pokeroff.