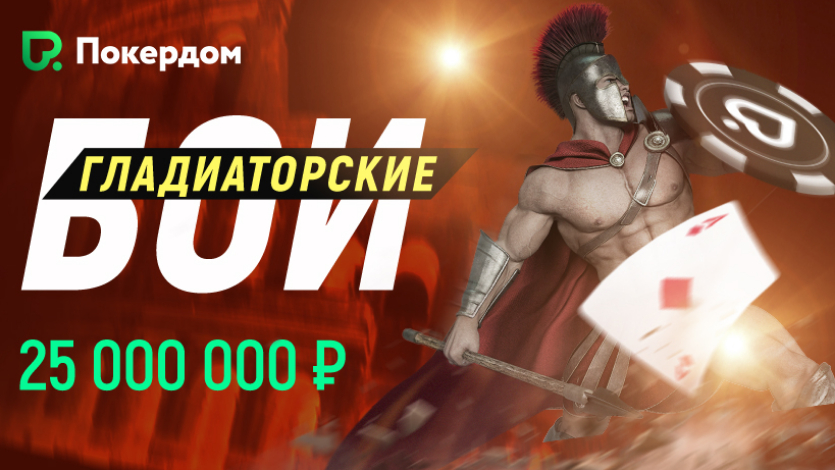 The new knockout series “Gladiator Fights” with a total guarantee of ₽25M is successfully held at Pokerdom from January 29 to February 21. Were there any overlays in the first two weeks, who is still leading the rating of players and how to get into the largest tournaments of the series – read our material.

In the first week of the series, 37 tournaments were held in the room, and only one with an overlay. The rest have gone over the guarantee – the total amount above the guarantees of these tournaments is ₽3,870,890.

In the second week, 35 more tournaments were held and also only one had an overlay. The total prize money exceeded the guarantee by ₽2,417,389.

Who leads the leaderboards of “Gladiator fights”

Points are awarded for participation in tournaments of the series, depending on the buy-in of the tournament, the coefficients are 1, 1.5 and 2. The winner of the rating will receive additional ₽150K, in total ₽750K will be distributed between the TOP-25. At 15:00 Moscow time on February 14, the TOP-16 of the rating looks like this:

In this leaderboard, points are awarded for knocking out players in tournaments of the series – 1 knockout = 1 point. The winner of the knockout rating will receive additional ₽50K, and 25 players will receive prizes totaling ₽250K. At 15:00 Moscow time on February 14, the TOP-16 of the rating looks like this:

The biggest guarantees of Gladiator fights are laid down in two tournaments – ₽3,535 Main Gladiator Tournament ₽3.3M Gtd and ₽15K High Roller Gladiator Tournament ₽1.5M Gtd. You can get into them either by paying the buy-in directly or by fulfilling the conditions of special promotions for NLH cash tables. You can track your place in each rating through the Promotions -> tab of the action of the same name.

Collecting flushes on any cash table gives points to the leaderboard, the TOP-20 of which gets a ticket of ₽150 at the end of the day [Ежедневный Сателлит], where 6 tickets for the Main Series are guaranteed.

Each flush counts for 1 point – the more points you score, the more likely you are to get a ticket. This is how the rating for February 13 looks like.

Getting a 666xx full house using pocket sixes gives a ticket of ₽15 [Степ Сателлит] on the Main Series, in which 15 places are awarded for ₽150 [Ежедневный Сателлит].

No more than 50 tickets are handed out per day, and each player can receive no more than one ticket per day. TWICE tables are not eligible for the promotion. You don’t have to go to showdown for your hand to count.

Getting quads of eights – combination of 8888 – at any Hold’em cash tables will give the player a ticket of $ 100 [Степ Сателлит] with a guarantee of 3 places in ₽1K [Супер Сателлит] – 2 tickets to the target tournament are played in it. Up to 25 tickets are issued per day, no more than one ticket per person.

What you need to know about the Main Gladiator Tournament