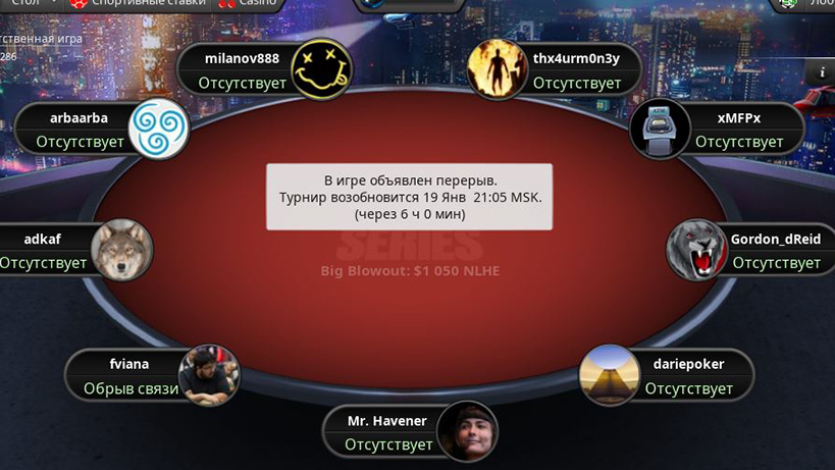 Out of 6922 registrations in the main event, only 9 players remained. Each guaranteed $ 57.8K, but $ 983K is at stake for the former. We will find out who will win today, but for now we invite you to meet the finalists of the $ 1050 Big Blowout.

The Canadian player “Gordon_dReid” is not familiar to the general public. If you try to enter his nickname into Google, only 8 sites will open, and most of them are related to reaching the final of this tournament. It looks like the account is fresh. On SharkScope, the graph is not built, in the statistics tab there are 20 entries (including 12 repeated) with an ABI of $ 17. And in the last tournaments there are 6 satellites. At PokerProLabs ‘Gordon_dReid’ 19 events were tracked with a total winnings of $ 1,055, with the largest buy-in being $ 55. From which we can conclude that “Gordon_dReid” qualified for this tournament via a satellite. All in all, well, a very dark horse at the final table and in case of victory, a potentially new poker star.

Another Canadian at the final table. HendonMob Lonnie Hallett has a modest $ 158K in prize money. But don’t be fooled ahead of time. First, “thx4urm0n3y” won the Blowout Series 12-H: $ 215 Omaha tournament. Secondly, he won the Sunday Million twice in 2017 and shared once in heads-up SM in 2014. How Hallett does this is only known to him.

Another dark horse at the final table. With xMFPx, the story is almost the same as with Gordon_dReid. You drive a nickname into Google – 8 pages with results on pokerprolabs. Best Performance – Top 3 in the Sunday Million Summer Series 2020 (+ $ 116K).

It is becoming a tradition to see at least one representative from Bulgaria at the final table. There is an assumption that this is the regular Alexander Milanov, but this is only an assumption. In any case, “milanov888” played 435 tournaments on Stars with a total winnings of $ 90K. Making the final table earned him the largest prize money of his online career. Prior to that, the best result was 10th place in the $ 2,100 Stadium Series tournament and $ 11.5K in prize money.

The closer the top 1, the cooler the players. Marian “adkaf” Friedrich from Austria has earned over $ 1.5M in online tournaments. For some time he specialized in MTSNG, but left for MTT. Top scores:

What a final table without the Brazilians. There are two of them in the Blowout main finale. “Mr. Havener skated 2000 tournaments at Stars since March 2019. Mostly I played $ 11, $ 22 tours. Almost qualified for the Big Blowout satellite (won $ 941), added $ 100 of his own – and now plays at the final table.

Half a million in live tournament prizes and over $ 6.5 million online. If you were looking for the strongest reg at the final table, then this is Brazilian Fernando “fviana” Viana. He won the $ 5,200 Grand Final Stadium Series Online in 2020 (+ $ 721K). And I’m ready to fight for victory in the Main Event Blowout Series.

Romanian player Vlad “dariepoker” Darie is ranked 4th in the list of the best players in the country with $ 1.9M won in live tournaments. Vlad Darie won the WPT Main Event Vienna in 2016 ($ 174K), and then almost repeated his success in the private tournament for the WPT Champions in Hollywood in the same year – runner up, + $ 224K. On the Internet, Vlad’s best result is winning the SCOOP $ 2,100 tournament in 2018 (+ $ 240K).

A participant from Lithuania under the nickname “arbaarba” will continue the game as a chip leader. According to pokerprolabs, “arbaarba” has won over $ 1.3M in online tournaments. Best performance – 2nd place in the 2018 Sunday Million ($ 98.8K). Also in the piggy bank are the first and second places in the Bounty Builder for $ 109.

The final promises to be interesting. Continued at 21:05 GMT Who do you think will be the new Blowout Series Champion? Share in the comments. And join the discussion in our Telegrams.