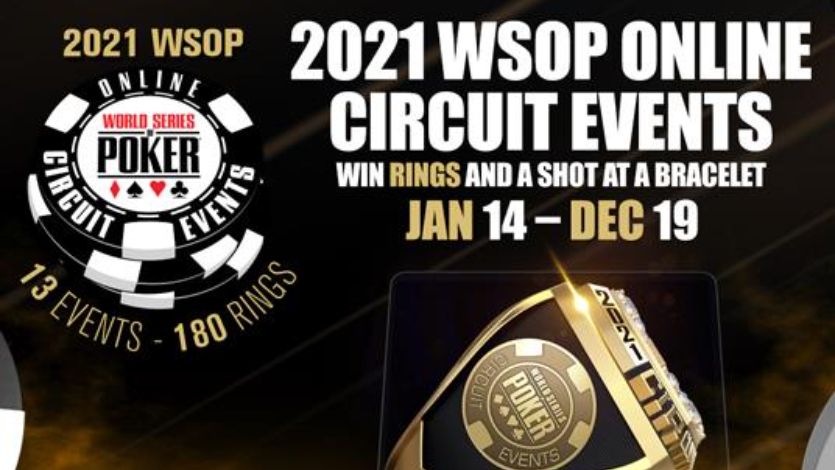 More than 180 rings will be drawn by the participants of the WSOP Online Circuit throughout 2021. Why “stretching” the WSOP for a year is good and bad for poker, and why was it done at all?

A press release has been published on the WSOP.com website announcing that the WSOP Circuit will run throughout 2021. The tournaments will be run in series named after Las Vegas casinos (excluding Winter, Spring and Summer Series). 12 or 18 rings will be played for each series.

Schedule of the WSOP Circuit series in 2021 (the number of “ring” events is indicated in brackets):

The site has published only the schedule of the next WSOP Winter Online Super Circuit. Here are the main tournaments:

It is known from the press release that the schedule of each episode includes freeroll at $ 25K, in which all the winners of the ring events (12 or 18 people) and the top 10 players of the series leaderboard will take part. And every month the players will play $ 10K on leaderboard.

There will be a total of 12 stages and one special event with a prize pool of $ 250K and a cap of 256 participants, which will feature a WSOP gold bracelet. This event is a private freeroll, which can be entered in one of three ways:

Incidentally, WSOP.com is planning to add another streak as soon as another state legalizes online poker. Probably, we are talking about Michigan, where on December 29, Governor Gretchen Whitmer (Gretchen Whitmer) passed amendments to the law on online games of the state of Michigan, according to which residents of this state can now play in a common pool with players from other states. Online poker in Michigan is expected to launch in late January.

Why was the WSOP Circuit stretched out for the whole year?

There are two main reasons for this:

Reason 1. As live poker remains in limbo in 2021 due to the epidemiological situation, the decision was made to move live poker to the Internet.

Typically, the WSOP Circuit stages take place in a variety of locations. Here’s just half of the 2020 WSOP Circuit schedule. There are stages in Brazil, Canada, France, as well as stages in the USA (Los Angeles, Las Vegas, Tunica). Of course, canceling offline events means huge lost profits for organizers.

Reason 2. The WSOP decided to cash in on the brand. This reason follows from the first. At least that’s exactly what CEO Ty Stewart said in a press release for wsop.com (it’s unlikely that the guys from the WSOP just sat at home and at Zoom were “happy” about the huge prize pools in tournaments):

“Players deserve great tournaments and great value throughout the year, which is why we’ve decided to run the WSOP Circuit Online throughout 2021. We were delighted with the massive prize pools of WSOP.com events in 2020 and hope to see growth in the new year. “

The trick is that the WSOP, as the brand owners, keeps 0.5% as an administrative fee on the prize pool of each tournament. Pay attention to this in the lobby the next time you download the WSOPC tournament at GGPOKEROK.

It’s funny that the WSOP Online series turned out to be of no interest to the general public compared to the live stages of the past. Here’s what the World Series of Poker search dynamics look like. The Spades on the Chart are the WSOP Series that took place in Las Vegas over the summer. There was no such standard peak in 2020.

Any series is always good. Players will know that regardless of whether they are offline or not, they will always be online. Moreover, the organizers added over $ 600K in additional promotions in the form of leaderboards, freeroll prize pools and tickets.

Previously, the WSOP Circuit was a world series, which was dominated by players from the locations where the series came. And only a small group of regulars traveled along with the series to new locations. In 2021, the WSOP Circuit will be a series for regulars from the states of Nevada and New Jersey (we anticipate your question, players from Russia and Belarus cannot play on the series unless you are located in these states). And the charm of the series will be lost, even regular players will get bored with WSOP Ciruit. It’s like having champagne with oysters every day for breakfast, lunch and dinner – it gets boring. Let’s be glad to be wrong if our prediction doesn’t come true and the WSOP Online Circuit breathes new life into online poker in the states.

Do you think the WSOP Circuit will benefit poker throughout the year or not? Share your opinion in the comments and join the discussion at chat.